Optimize Your Network with Peer Advisory and Masterminds

“If I have seen further it is by standing on the shoulders of giants.” ~Isaac Newton

When the Walt Disney Company added Facebook COO Sheryl Sandberg to its board in 2009 she joined executives, some who had retired, from Seagram, Estee Lauder, Twitter, and U.S. Hispanic Media, among others.  Together, they bring valuable perspective from relevant brands and industries to advise Disney on its strategy and opportunities for success. Sure, Disney’s a media powerhouse with the clout to assemble top names for its board. But why shouldn’t entrepreneurs benefit from the wisdom of a wisely assembled group of peers who can share their experiences from the perspective of a similar company size and leadership role? More so, how handicapped is the small business leader who does not have a peer advisory network?

Disney and other public companies have Boards of Directors (BoD) to hold them accountable to their corporate vision, and targets and to provide valuable, outside perspective on the critical challenges their businesses face each quarter. Just because your business is smaller than Disney and private, does not mean having a trusted group of peer advisors is not an essential component of success. It’s the second leg of the Optimize for Growth Model for an important reason:  An entrepreneur alone is an entrepreneur at risk.

Peer advisory networks and masterminds consist of other business leaders, like yourself, who can help problem solve issues and test ideas from their vantage points of similar roles, industries, or business sizes. Some leaders may have more experience than you, some may have less. The power of the group input, from varying perspectives, gives you traction to resolve issues, gain new ideas, and leverage the wisdom of their collective experience. 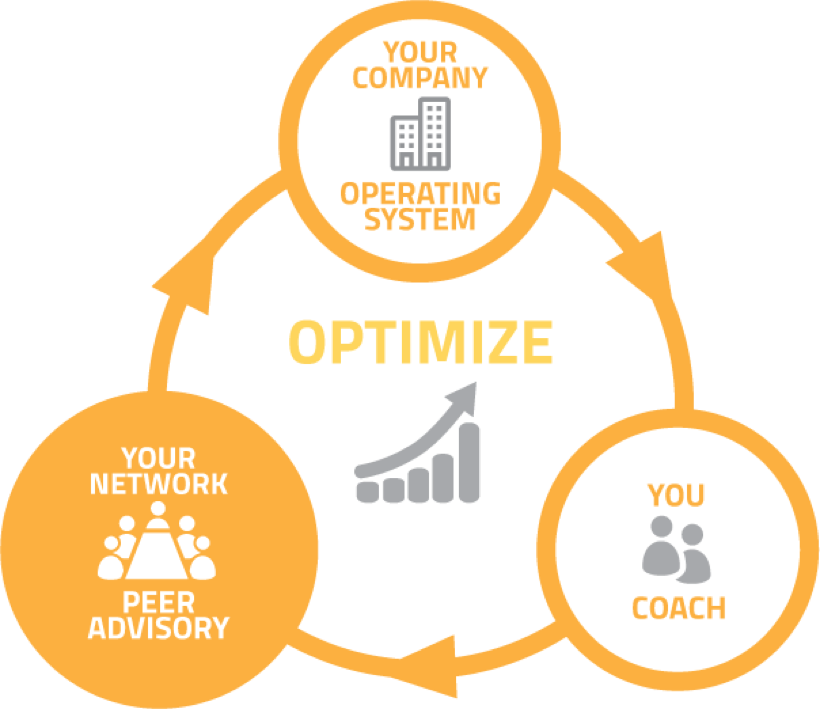 The Power of Group Think

At my former company, Wave Dispersion Technologies, Inc., we had a situation in which a client refused to pay a $50,000 invoice. The client’s company had gone bankrupt and we wanted both payment from them, as well as controls to prevent similar situations in the future.

At the time, I was a member of a peer advisory group through the Entrepreneur’s Organization (EO), a global peer-to-peer network of entrepreneurs. In my local Detroit chapter, I was a member of a “Forum,” a member-led, confidential, peer-sharing program that consisted of owners of similar-size businesses from a range of non-competitive industries and backgrounds.  EO’s philosophy centers around confidential peer-to-peer sharing based on individual experience, known as “gestalt protocol” and not on “advice.” The magic lies in the realization that there is often another member who has expertise or experience around the issue or decision you are grappling with in your company.

I told my EO Forum group about the problem. One of the members suggested that we always put a UCC 1 Statement filing—a mortgage instrument that secures the lender’s/vendor’s claim—to the assigned collateral (e.g., the materials sold to the customer).  I wished I had known this before I sold to the client that went bankrupt.  I immediately put a process in place to secure a UCC filing on all future sales of $50,000 or greater where we had any concern about counterparty credit worthiness.  In essence, the input from my “peers” catapulted me up the entrepreneur’s typical learning curve. I took the elevator instead of the stairs.

Improve Your Odds of Success

Six months after founding his sales consulting firm, Imagine Business Development, Doug Davidoff faced a high degree of uncertainty. During this time, Vistage, a peer advisory company where groups of up to sixteen members meet for a full day with a guest speaker, invited him to speak at one of its local group’s meetings. After doing so, Doug realized that this type of peer networking group would be valuable for the stage he was at with his business.

“I benefitted a lot from Vistage,” he said. “In the beginning, I learned that successful business owners had as much uncertainty as I had. There was no magic answer.”

While he admits to having some nervousness with the group early on, he eventually learned to share within the group, and that his concern that he didn’t have the experience to make certain types of business decisions was the norm. “It didn’t feel so strange,” he said.

Doug sums up his peer network benefits as:

One of the advantages is that you get to see and experience so many people’s issues that when you’re dealing with things on a day-to-day basis, they’re less serious.

2.     Confronting Potential Issues Ahead of Time

When issues arose, especially when it came to dealing with people, I felt more comfortable. I had had the meeting in my head ahead of time. Within a year period, 90% of what happens to me, has happened to someone in the group.

After two years, my company decided to make a bold strategic move. I put the idea in front of my Vistage group to get feedback. Of the 17 people in the room, 14 said it was a risky idea. But I had dealt with every issue they brought up. I realized that I had thought it through as much as I could and it was time to put it into practice. We had our first client within two weeks.

At the end of the day, I want to know if I’m asking the right question. A peer group lets you find that space where you’ve thought it through enough. It allows you to make faster decisions with more confidence.

Chances are, one of the several peer network organizations has a local membership group near you.  Peer advisory groups come in a wide range of shapes, colors, and sizes.  Some are very formal with substantial membership dues, formal bylaws, and strict membership criteria. Others are free, with loose guiding principles and easy entry.  You can likely find a peer group, no matter where you live: inquire at the Chamber of Commerce, your local house of worship, or on the Internet.  Below is a sample list of some well-known peer advisory groups:

Entrepreneurs’ Organization (EO)
EO, which I joined after founding my first startup, focuses on entrepreneurs and members lead its groups. EO also provides opportunities for executive education, mentorships, and global events. The organization’s philosophy of gestalt guides members to provide input from their own business experience rather than advice for its own sake.

Young Presidents Organization (YPO)
YPO, the global networking organization of company leaders under 45 years of age, hosts forums, events, mentoring programs, and learning events across 125 countries. YPO’s prestige gives members access to corporate and government leaders and active social communities for networking and growth. YPO focuses on the “whole person” and emphasizes both the personal and professional fulfillment from membership.

Women’s Presidents Organization (WPO)
WPO is a non-profit organization for women presidents of multimillion-dollar companies. The professionally facilitated peer group meetings help female leaders achieve success both as women and for their organizations.

Vistage
Vistage is known for its CEO and small business forums of up to sixteen members in similar-sized companies across industries. An experienced Vistage Chair facilitates each monthly, full-day meeting. Members also receive monthly private executive coaching from the Chair. The global organization provides groups for development of key executives within companies as well.

The Alternative Board (TAB)
TAB targets local small/medium-sized business owners who run non-competing businesses with group sizes of five to ten members. Each board is formed and facilitated by a Certified Business Coach/Facilitator and meets once a month. Members may also opt to meet with the facilitator for private coaching.

Selecting a peer group often comes down to finding the right fit for you. However, it’s important that your group consist of members with similar:

Company size —A $2M cannot relate to $50M business owners but will learn from $15 million owners.

Authority—Are other members also running their own business with final say for strategic direction, hard decisions, and employee issues?

Goals—Do they want purely professional development, family and business, or personal growth? This may not be apparent at the outset, but eventually, the group dynamics will reflect its members’ goals.

And of course, this is a strictly confidential environment consisting of similarly sized non-competitive companies.

Whichever type of group you choose, the chief benefit of a peer network is the forced accountability it gives you toward your strategy, goals, and execution. Some leaders remain in peer groups for years, and longevity has its benefits for the trust and sharing that comes with relationships developed over a period of time. Other leaders find that they outgrow their groups and migrate to new groups to match the changes in their business, stage of life, and personal goals.

Eventually, you may develop the networking skills and relationships to form ad hoc peer groups on your own, entrusting a select group of trusted advisors to be your sounding board for key decisions and issues as they arise. It’s essential to continue to leverage peers for ongoing feedback to balance your views on the business.

In addition to leveraging a peer network, entrepreneurs must also develop their personal leadership skills. Leading at the top can be a lonely endeavor. Often, there’s no one available to understand and coach you on the specific issues a leader encounters day to day and during crises. To give you the maximum traction for your personal leadership, it’s important to work with an executive coach, who holds you accountable to your near- and long-term professional and personal goals.

Do you have a clear process to scale your business?

How to Choose Happiness

3 Tips for Running EOS in the Age of Coronavirus

How to Keep Your Key Experts Motivated, Engaged and Productive