Lieutenant General (LTG) David Huntoon hosted a group of entrepreneurs at the Pentagon for a “fly-in” in May of 2008. My good friend Troy and I were fortunate enough to receive our invites from Dan Heuertz and the Entrepreneurs’ Organization. We knew we should not miss it. In the below right picture, Troy and I met with LTG David Huntoon, Director of the Army Staff.

LTG Huntoon made an effort to personally meet and greet everyone. When he got to Troy, LTG Huntoon asked Troy if he had ever served in the armed forces. Troy has not, but is constantly asked which branch of the military he was in as people assume based on his posture and look that he is a military man himself. I got a kick out of the question, especially given the stature of the man asking it, because I call troy “Human Weapon.”

Troy has a 3rd-degree black belt in Taekwondo. I regularly tease him that he is my bodyguard. Unsurprisingly, Troy has a great sense of humor. The following evening, he embellished the photo to play out the subliminal exchange between us when we met LTG Huntoon. The thought bubbles are a bit hard to see in the low-resolution photo, so: 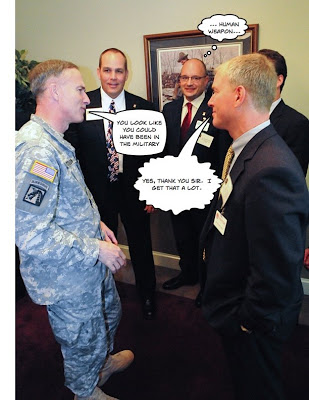 LTG Huntoon – “You look like you could have been in the military.” Troy – “Yes, thank you sir. I get that a lot.” Jonathan – “Human Weapon”

The Human Weapon on the Accountability Chart

In actual protection work, Troy’s role as “Human Weapon” via the O4G accountability chart is:

An executive protection professional, perhaps more than any other role, needs to Get It, Want It and have the Capacity (GWC) to fulfill their responsibilities to the team. When a bodyguard does not GWC their role, people get hurt, kidnapped, or even end up dead.

Thankfully, your business likely does not involve mortal threats or flying shrapnel, but the danger of someone not GWC-ing is still real. A person who does not GWC is an organizational liability.

Often, they will drop the ball, blame others, and create drag on the organization. They simply are not cut out for the role they are in. Make sure you are always protected from this madness. Ensure that everyone role in your organization has someone who GWCs in full.

3 Tips for Running EOS in the Age of Coronavirus

How to Keep Your Key Experts Motivated, Engaged and Productive